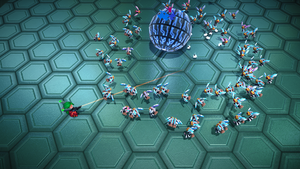 Wasps during the Vespula boss fight.

"Used widely across the ship as the information gathering network of the Section Lords, Wasps deliver painful stings by temporarily boosting their power output to electrify their casing."[1]

The weakest enemy but also the most numerous, Wasps typically appear in large groups. Wasps are modelled as simple physics objects that simply accelerate slowly towards the nearest player, they make no attempt to pathfind, leading them to geting stuck against walls frequently. Similar to Mines, wasps are active enemies from the moment they spawn (They have no dedicated spawn animation), and thus they can damage and be damaged at any time (Notably with weapons that can damage in the Z axis such as the seeker and explosive weapons).

Touching a wasp incurs one point of damage. During normal levels, are unique in that they can never spawn from the sky, if there are no pits in the current level, they can only appear from Wasp Tanks.

Wasp Swarms can be a lot of trouble for weapons with high overkill (eg. Liquorice's Cannon, Shiitake's Railgun). Using your secondary or Firepower is sometimes necessary for some characters to clear them out in any reasonable time.

Wasps are worth only 1 point during Vespula's 1st, 3rd and 5th phase, and 0 points during her final phase.

Wasps are useful for setting up Surges. Put a high-value target between yourself and a wasp, destroy the high-value target, then immediately kill the wasp to get the surge bonus on both kills.

Explosions (eg. Rockets, Propeller Mines) are effective, but wasps have a "blast resistance" property in order to prevent explosions from clearing out enormous disks of wasps at a time.[2]

Retrieved from "https://assaultandroidcactus.miraheze.org/w/index.php?title=Wasp&oldid=1744"
Cookies help us deliver our services. By using our services, you agree to our use of cookies.