Turrets are stationary enemies that use unique spawn locations within a map, often spawning on islands and other inconvenient places. Their firepower can drastically increase the level of chaos, which makes them a high-priority target in most cases.

All turrets have a short delay after spawning in before they begin firing - this is your chance to destroy it before it can do anything.

All turrets are fixed to the ground, Coral's Plasma field, Aubergine's Singularity and Peanut's Giga-drill will not move them, nor will they be pushed around by other enemies moving past them. 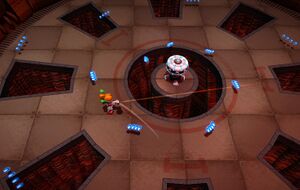 "Kept in reserve by the ship security forces, Bullet Turrets are autonomous defenses that spray energy projectiles in all directions."[1]

The weakest type of turret, Bullet Turrets fire bursts of bullets in a spiral pattern.

They have low health and are easily dealt with, but can spawn in greater numbers than other types of turret, and will fill the arena with bullets if left unchecked. It is generally advisable to deal with these as soon as you can to keep the amount of enemy bullets in play down. 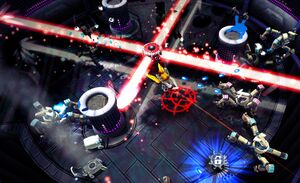 "Intended as a last line of defense, Laser Turrets utilise four high powered beams that cut through friend and foe alike. The power requirements are high and require a regular power cycling phase during which the lasers are harmless."[1]

Laser Turrets fire a red laser beam in 4 directions, and slowly rotates clockwise. The beams extend infinitely and deal extremely high damage (though it's possible to brush with them without dying)

To get through the beam, you can Weapon Swap through it, take cover behind a wall or heavy enemy, walk through it perpendicular with Firepower (using the drones to block the beam), or simply bolt through it with Accelerate, taking heavy damage but probably not enough to kill you.

The beam deals red damage, meaning it can kill enemies for you. This can be a blessing in that if you're comfortable dancing around it, it can lighten the load of enemies, but a curse in that it will steal your kills and hence lower your Score. 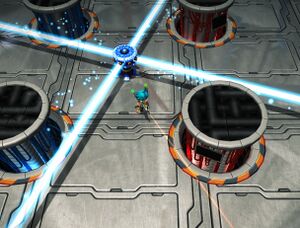 The Campaign's only Maser Turret, in Collider.

"Maser Turrets are constantly modulating their wavelength to allow their beams to travel through friendly targets, ideal for deployment in contested areas. Thickened armour and a faster turning rate make them even more dangerous."[1]

Exactly like the Laser Turret, but with more health, a faster turning speed, an anti-clockwise rotation and the beam deals blue damage, meaning that it doesn't affect enemies. It even passes straight through enemies, so you can't use them as cover. The upsides are that the active time of the beams is much shorter than the Laser Turret, and that they won't deny you score by killing robots themselves, and that the beams are slightly thinner. The thinner beams and faster turning speed mean you can pass through it with Accelerate without being instantly knocked down, but this is only useful in an emergency, usually you'll want to weapon swap through the beam.

Notably, only one of these shows up in the entire Campaign - in Collider. However in Infinity Drive they appear on a lot of layers, particularly when you're on the red path.

Retrieved from "https://assaultandroidcactus.miraheze.org/w/index.php?title=Turret&oldid=1713"
Cookies help us deliver our services. By using our services, you agree to our use of cookies.