Titans are large, high health, lumbering heavy hitters. They often form the primary threat in waves of enemies, and can be very difficult to take down in numbers. All three feature attacks that can knock you down instantly and are much more threatening if you don't have Accelerate active. Due to their high health, it is often required that you use your secondary weapon or Firepower to take these down without dropping the chain unless you can find some other way to pad the chain out. 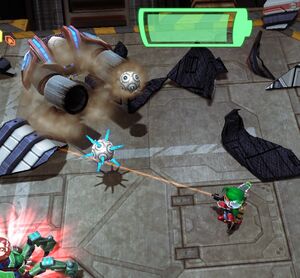 "Hulking denizens of the lower decks, Bomber Titans are maintenance machines that have been repurposed to produce Mines within their body and pneumatically propel them at threats. Slow but heavily armoured, their Mines are dangerous indiscriminate weapons."[1]

The first type of Titan the player encounters, Bombers have medium health and fire two Mines, one from each arm. Before each shot, it must perform a short reloading animation to arm its mines, but can move as normally after doing so if it does not have line of sight after armings its mines. Bomber titans also will not try to perform their loading animation without a line of sight for some reason.

The Bomber Titan is harmless if you stand extremely close to it, as it has no melee attack. Any mines will go straight over your head.

The fired Mines can refresh your Combo if destroyed, but are not worth points nor will they increase your chain length.

They can be identified by their white coloring. 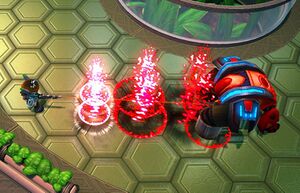 "Slightly weaker but more mobile than the Bomber Titan, Blaster Titans are constantly generating and maintaining massive levels of searing pressure inside their bodies. When pumped into the floor it causes cascading ruptures capable of destroying friend and foe."[1]

Blaster Titans attack from a long distance with a high-damaging "shockwave" attack that can gently curve to track the player. Getting hit is a near-instant knockdown. Being red damage, the wave can also destroy other robots along its way, dealing 10 or so damage to everything it hits. This attack can only be performed while the titan remains still, if it is moved for any reason, such as a moving floor moving it or Aubergine's Singularity weapon pulls it in, it will immediately abort its attack.

The Blaster Titan is not dangerous if you stand extremely close to it, as long as you don't get caught by the easily-avoidable shockwave. At greater distances they are more troublesome since you are more likely to get distracted by closer threats. If you see a shockwave coming and cannot move out of the way, you can use Weapon Swap invulnerability to dodge it.

They have the least health out of three types of Titan and can be identified by their red coloring.

Buster Titan leaping towards the player in Collider.

"Prioritising physical agility over weapon systems, Buster Titans are internally producing high octane fuel to boost their movements. They are capable of leaping gaps and hurling themselves into the air for massive kinetic impacts."[1]

Buster Titans, identifiable by their blue colouring, are probably the most dangerous variant of Titan, as they are both the toughest and most mobile. When out of melee range they will lumber towards you at about the same speed as your normal walking speed. However, they don't walk directly at you, but rather walk towards an imaginary point slightly in front of you in the direction you are moving in, making them very tricky to avoid. If you have accelerate, this imaginary point is slightly further away from you to compensate.

Additionally, when far away they will leap towards this point in front of you extremely quickly and aggressively, even leaping over pits and pushing aside other robots. However if they are preparing to jump and they notice you are now no longer far away from them, they will abort their jump and walk towards you instead.

When in melee range they will leap into the air and perform a downward smash, which deals up to 6 damage depending on proximity. With Accelerate the smash only does up to 4 damage, meaning that it can be absorbed without getting knocked down if you have at least 4/5 health. Since the part of the attack that deals damage is very short, you can use weapon swapping to avoid damage, do try to move away during this time else you will find the Titan will simply attack again.

Buster titans are a huge source of points, basically every level that contains them will require you to surge them all in order to have a shot at #1 score. While leaping from a distance, Buster Titans can be damaged, but if destroyed they will only explode once they land, potentially messing up your surge timing. However while leaping upwards to attack, they cannot be damaged at all until they land, even with weapons with Area of effect damage or homing abilities.

Retrieved from "https://assaultandroidcactus.miraheze.org/w/index.php?title=Titan&oldid=1625"
Cookies help us deliver our services. By using our services, you agree to our use of cookies.