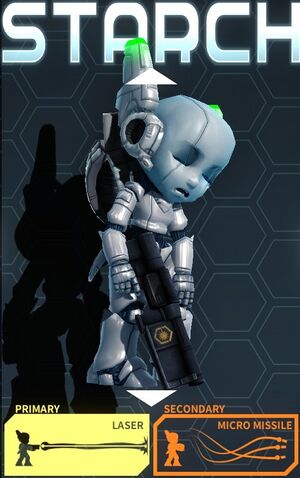 Starch is the fifth android in the roster. She is unlocked after defeating Embryo in Campaign mode.

An unfinished android with a penchant for fairy tales and mass murder, Starch was freed from her well-deserved deactivation by Cactus.

A fairly flexible character, her Laser Rifle can deal acceptable damage from afar but devastating damage up close. Her Micro Missiles, while not particularly potent, are numerous and can damage many targets at once.

Starch was brought onto the ship in a dormant state and activated to serve as Aubergine's replacement. Boasting an even lower 'CDI' rating, the crew anticipated she would be the ideal personality-less servant right up until her catastrophic activation failure.

[Starch is] what the Androids look like before they get synthetic skin (complete with hair follicles) stretched over their heads and have their irises attached.

An active Core can't return to a dormant state, but the Android itself can have its body deactivated, like a full body paralysis. Starch was awake the whole time.

Everyone except Cactus is a little bit worried Starch might flip out and kill them.

The others think Cactus let Starch out because of misplaced sympathy or an unwillingness to believe she could have terrorised the entire ship, but Cactus knows what she is and just believes she's a valuable asset that shouldn't be wasted. Ironically, while Cactus hopes to win Starch over by showing her kindness and treating her like an equal, what keeps her line is that every future where she tries to cross Cactus ends with her head getting punched off. So that's why they're friends.

Laser Rifle in its various reinforcement stages, from left to right.

The Laser Rifle has a narrow beam, an instant travel time and unlimited range. Its damage increases with proximity to the target - while it deals mediocre damage at long range, at point blank range it can punch through even Titans extremely quickly. The weak long range DPS is still sufficient to pick off light enemies at a distance if necessary.

It lends itself to an extremely aggressive playstyle, probably the most aggressive out of any Android, where you get right up in the face of every enemy (except for Buster Titans).

The Laser is a perfect weapon for skewer surges.

The extremely short optimum range can be a disadvantage against some bosses that need some space in order to dodge their attacks. 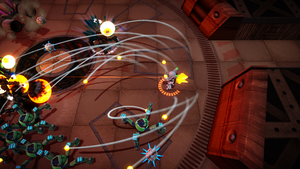 The Micro Missile launcher fires a rapid salvo of small, homing missiles that hit for roughly 16 damage each with a small splash radius. The missiles will track nearby targets that Starch is facing towards and can travel over walls and obstacles due to their launch arcs. Each missile will try to target a different enemy if available and will tend to prefer enemies at mid range in the direction starch was aiming when they were fired. Only starch's facing matters, the exact position of the mouse cursor does not affect the aiming of the missiles.

While the overall range is extremely good, however the launcher requires some space either side of it to launch its missiles, and the missiles themselves will make no effort to avoid obstructions. Keep this in mind else you'll find a lot of missiles impacting on nearby walls instead of an enemy.

A fully cooled-down salvo fires 23 missiles for a total damage output of roughly 368. Heat level affects the number of missiles that can be fired before overheating. The highest heat level that can still be fired (ie. smallest possible missile salvo) is roughly 60% (ie. 2.5 out of 4 bars of heat), and fires 7 missiles (about 112 damage in total).

You can tap-fire to shoot missiles one-by-one, though the fire rate is so high that you're likely to fire two-missile bursts unless you tap very quickly. Filling the heat bar will prompt an automatic weapon switch shortly after, even if the fire button is not being held. The player can manually switch immediately after firing all missiles, which is slightly faster than waiting for the automatic switch, but the timing can be difficult to judge.

An amazingly versatile weapon with good range, homing, and the ability to fire over walls, Micro Missiles can be used in virtually every situation and against every enemy. The main weaknesses is that it takes a short while for the missiles to travel (Even to close range targets) and you have little control of which enemies it will target first, making it a poor choice for dealing with close range threats or quickly getting a kill to pad the Chain. Overall DPS is not amazing (A level 3 laser at point blank actually deals damage faster), but is easily made up for in versatility. 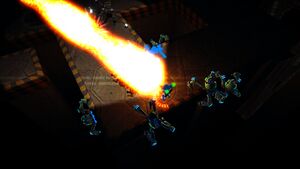 The mega Laser in action

Replaces the Micromissiles when the "Mega Weapons" EX option is enabled (disabling leaderboards).

A simple short burst laser which does the same damage regardless of range, similar to lasers used by Reapers, but much more powerful. Generally not as useful as the Micromissiles except for dealing with bosses.

Starch's ability to quickly take down enemies of all types makes her the fastest Android for most levels. For some of the earlier levels (such as Hive), this speed can outweigh slower, Surge-heavy Androids like Shiitake. This speed makes her the best choice for Infinity Drive.

She is also a favourite for a full campaign S+ run, since she's fairly easy to use, her Micro Missiles are exceptional for holding chain, and her damage output is fairly good for bosses.

When it comes to weaknesses, some players will have trouble with her hyper-aggressive playstyle which can put her in danger. When running for high scores, getting Surge kills can be finicky. Micro Missiles have unpredictable behavior, and will sometimes hit walls or swirl around a target. 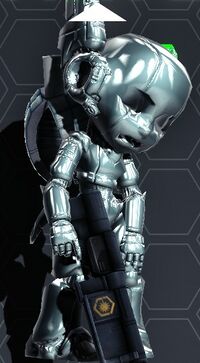 Starch's metallic skin can be unlocked by completing every level in Campaign using her. Any completion Rank will suffice.

This skin replaces most textures of her model with a metallic silver finish. The tips of her data horns retain their original green color, and her eyeballs take on a creepy, bright green shine.

Retrieved from "https://assaultandroidcactus.miraheze.org/w/index.php?title=Starch&oldid=1612"
Cookies help us deliver our services. By using our services, you agree to our use of cookies.