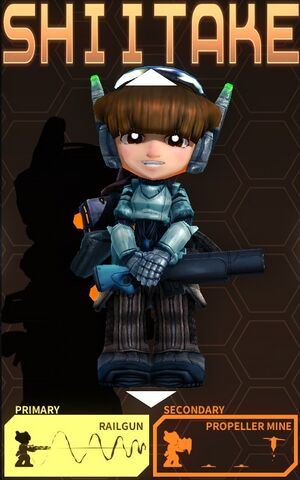 Shiitake is the seventh android in the roster. She is unlocked after defeating Justice in Campaign mode.

While she is a challenging character to play with her slow-firing, unforgiving weapons, her Railgun and Propeller Mines have immense score and damage potential.

Shiitake was built on Phobos to be a guard in the frozen goods region of the Genki Star. While an excellent hunter, she is starved for companionship and became close friends with Holly, who started visiting regularly upon realising the freezer insulation prevented Embryo contacting her to assign extra work.

Shiitake is owned by the Genki Star and is rarely let out of Frozen Goods, let alone the ship. She spends long periods completely by herself and practices target shooting and inventing new games to play.

Shiitake's Core Defect Index is 9, which is comfortably within normal android range. She has spent a lot of time guarding a giant freezer with minimal social contact however.

Holly used to visit Shiitake all the time and has learnt to handle her oddness, Shiitake considers Holly her best friend.

Shiitake already had [her weapons] - one of the ways she managed her boredom was to gradually request heavier and heavier ordinance for vermin control purposes.

Shiitake's visor is meant for snow so when she's outside the freezer she doesn't tend to use it because it interferes with her peripheral vision. 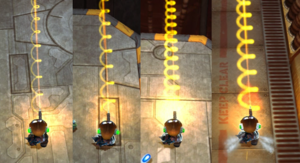 Railgun in its various reinforcement stages, from left to right.

The railgun is a distinctly different weapon compared to other primaries. Instead of a rapid fire weapon that deals heavy damage to individual targets, the railgun fires a single shot every 1.2 seconds that travels instantly and damages all enemies along the line of fire until the slug hits a wall. Every enemy struck takes the same damage no matter how many enemies are hit overall.

Rate of fire and shot width does not change with reinforcement, meaning that when it comes to enemies with less than 30 HP, the level of the weapon makes no difference whatsoever.

The weapon is balanced such that it has a reasonable DPS overall on a single target and has an uncapped potential due to the penetrating effect, but has massive overkill on weaker enemies, meaning that to keep up with other androids you need to line up as many enemies as possible with each shot.

Because the railgun fires so slowly, missing two shots in a row will mean dropping Combo, and that assumes the player is holding down the fire button. With any delay before firing, failing to score a kill with a single shot means the chain is lost unless a mine or Firepower bot can score a kill in time.

It can be important to remember how many shots each enemy requires in order to plan out Surges. The number of shots required to destroy a robot is tabulated below for convinience:

If an enemy is shut down, half the shots required and round up. 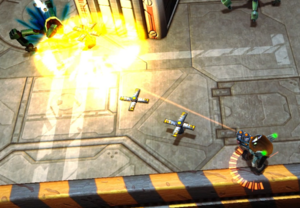 Each propeller mine is dropped in front of Shiitake and buries into the floor. The moment an enemy comes near, they jump up and explode, dealing a large amount of damage over a wide area that diminishes with range. Similar to the Railgun, mines do damage to all enemies in the blast area and do not scale damage based on how many enemies are hit. Their high damage means you tend to get a lot of overkill with most enemies, but when used in the middle of crowds the overkill damage loss is quickly overshadowed by the sheer number of enemies getting hit. This gives propeller mines arguably the highest damage potential of any weapon in the game, but this is tempered by the relatively long time mines take to deploy and the close range nature of the weapon.

If dropped in range of an enemy, they explode very shortly after being deployed, but not instantly.

For balance reasons, Propeller mines do significantly less damage to wasps, yet are still very capable of destroying large amounts at once. Without this "blast resistance", mines would clear out enormous disks of wasps at a time.[3]

A full charge contains 5 propeller mines. If you try to drop a mine with less than 1/5 of the charge remaining, you will still drop a mine, but its damage is reduced from the maximum of 85. 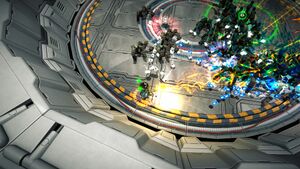 Based on rough empirical testing[4]

Replaces the Propeller Mine Layer only when "Mega Weapons" EX option is enabled (disabling leaderboards). The EX railgun is a rapid firing railgun, individually weaker than even the minimum level railgun, but still enough to destroy most common enemies. An interesting weapon to try to optimise, as firing at full speed tends to waste a lot of shots, but very destructive. The main weakness is that it takes away the exceptionally powerful propeller mines, leaving you without a close range weapon when getting mobbed.

The champion of high scores, Shiitake excels at getting the Surge bonus since it's difficult not to kill enemies simultaneously with either of her weapons. Also due to her uncapped damage potential, she excels at the later levels which are swarming with a greater quantity of tougher enemies overall. She also has an early advantage on levels due to her railgun being able to destroy any light enemy at any weapon level, when other androids are still building up their weapon energy.

Conversely, levels with sparsely placed enemies, even when just cleaning up the last enemies in a particular wave, shows her slowness. Most players using her for the first time will find the slow reload of the railgun particularly difficult to use since it means there is no way to quickly react to nearby threats and every shot needs to be planned. The slight delay before mines explode even when laid in range of enemies also presents similar problems.

Unless fighting wasps and mines in significant quantities, Firepower tends to actually interfere more than it helps, either by killing an enemy before you can surge it, or by becoming wasted damage, since dealing a little extra damage to an enemy that then gets obliterated by the railgun is not beneficial. Accelerate is often a much bigger overall damage boost, as it allows Shiitake to move around to line up her multi-kill shots much more quickly and also ignore dangers long enough to get key shots off, it also allows mines to be spaced out more quickly, maximising coverage.

Finally, Shiitake gains the most benefit over all androids when weapon swapping frequently. The long reload time of the Railgun means that it's actually quicker to shoot once, swap to her secondary weapon and then drop a mine than it is to simply fire two Railgun slugs. Couple this with the fact that her two weapons compliment each other's weakness very well, so learning to swap weapons frequently is a key skill to using Shiitake. Generally, if enemies are lined up, use the Railgun. If there is no line to work with, but they're grouped nearby in some way, use Mines. 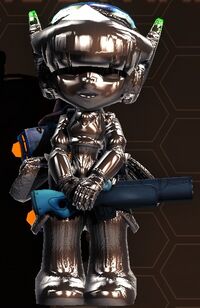 Shiitake's metallic skin can be unlocked by completing every level in Campaign using her. Any completion Rank will suffice.

This skin replaces most textures of her model with a metallic brown finish. The tips of her data horns retain their original green color.

Retrieved from "https://assaultandroidcactus.miraheze.org/w/index.php?title=Shiitake&oldid=1605"
Cookies help us deliver our services. By using our services, you agree to our use of cookies.