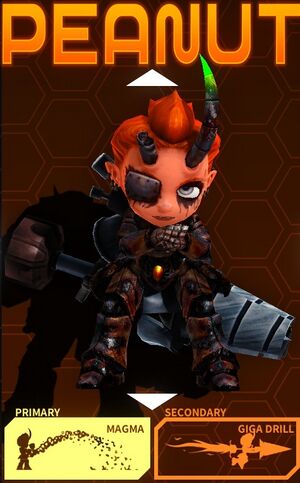 "Onto the scrap pile!"

Peanut is the eighth android in the roster. She is unlocked after defeating Venom in Campaign mode.

Her Magma Launcher can do formidable damage at close range, and her Giga Drill can drill right into enemies, pushing them across the screen and slamming them into walls.

Peanut was built on Europa. Quickly discovering she was bad with people but very good with machines, she worked on various power stations around Jupiter before joining the Genki Star crew due to a personal interest in the ship. Her passion for the mechanical does not extend to her own frame which she only repairs when absolutely necessary.

Peanut originally had a Satyr body, an Android frame popular in Jupiter region with backwards jointed legs and data horns instead of ear antenna. Her frame was badly damaged in a workplace incident and instead of waiting for replacement parts she had herself transferred to an available Assault frame. She's interested in returning to her original specifications at some point but can never find the time - engines are too fascinating.

Peanut tries to keep to herself. When pressed she'll spend time with quieter androids like Holly and Shiitake.

Magma Welder in its various reinforcement stages, from left to right.

The Magma Welder fires a continuous stream of magma which extends a short distance. While it boasts impressive damage, it suffers from low range and low projectile speed, which creates even lower effective range while moving forwards with Accelerate. If it hits the floor it will remain there for a few seconds and is not affected by conveyor belts or moving floors. Enemies that move over fallen magma (including flying enemies) will take the same as attacking directly. This pooling effect will not occur if the magma flies off the stage or hits a wall, so it's important to aim your shots with this in mind.

Reinforcement level increases the thickness of the stream and the overall number of magma particles fired.

Given that the magma persists on the floor for a short while, it is possible to prepare damage to enemies, particularly bosses, while a wave is still spawning or a boss is invulnerable during a phase transition by coating the floor with magma where the enemies will be. This makes Magma one of the most efficient weapons, as only a small percentage of shots will fail to hit anything at all.

Giga Drill drilling a Mega Keg down the length of Checkpoint.

A unique weapon, Giga Drill allows Peanut to boost forwards at high speed in a straight line. All light enemies in its path will be instantly obliterated. The Drill only travels in a straight line while the fire button is held, but can be maneuvred while the drill is not being used by letting go of the fire button, although there is some delay before Peanut will stop moving.

If a "heavy" enemy is hit, the drill will "bite" into them and push them along, dealing damage to it and anything else in the path. The damage dealt to the enemy reduces with time. If the enemy hits a wall (Including the edges of pits), it will be instantly killed and Peanut will repel off with an automatic weapon switch. This can be used to instant-kill or "wallbang" any enemy standing next to a wall.

Uniquely, the drill only consumes energy when dealing damage, simply dashing with it consumes none. Slamming an enemy into a wall will consume energy based on the amount of damage needed to finish it off. Even if there isn't enough energy to finish off an enemy pushed into a wall in this way, it will still destroy it anyway.

If drilling a boss or Turret, the target will not move, but Peanut will bite into them, deal heavy damage until the Drill overheats, then bounce away just like when hitting a wall. All bosses can be safely drilled without fear of being melee attacked. Even though the target is not being pushed, other enemies that come into contact with this target will still recieve the area of effect damage.

If you drill into a wall at a sheer angle, you can slide on it. This allows you to drill in circles around circular arenas. Of limited usefulness, but interesting.

Peanut is invincible while dealing damage with the Drill at any time, but vulnerable if not hitting anything.

Like Shiitake's Railgun, the drill is telescopic, allowing it to be carried on the back - otherwise it would be too large. 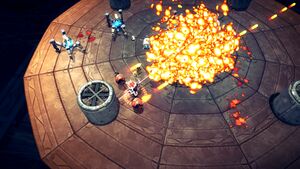 Replaces the Giga Drill only when "Mega Weapons" EX option is enabled (disabling leaderboards). The Mega magma spews a large number of magma particles over a wide area in a very short burst, useful for coating an entire area in magma ready for enemies to spawn onto, or just shoving in the face of a big enemy for big damage.

Peanut is an interesting character with good potential in the right hands. Giga Drill makes her one of the most agile characters alongside Liquorice, and allows her to take out multiple heavy targets with a single bar of heat. Her magma is also potentially very effective at killing weak enemies at high speed since you can essentially spawncamp enemies by covering their spawn locations with magma.

Her good close-range DPS and ability to drill through wasp swarms makes her a strong scorer for Vespula, as she can end the wasp phases extremely quickly and grab weapon power while she's at it.

Her main downfall is her lack of range and slow shot speed, which can be frustrating when dealing with distant or sparse enemies. Levels with awkwardly placed walls and pits can also prove problematic to using her drill and magma pooling efficiently. 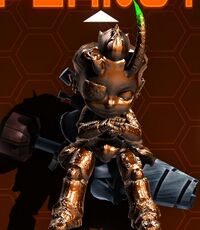 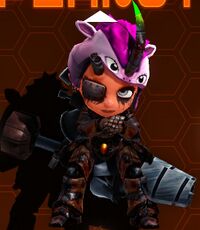 Peanut's metallic skin can be unlocked by completing every level in Campaign using her. Any completion Rank will suffice. This skin replaces most textures of her model with a metallic orange finish. The tips of her data horns retain their original green color.

She is also currently the only Android to have a second skin - if you get the Assault Android Awesome achievement, she gains an additional skin in which she is wearing a unicorn hat. Her non-broken data horn is poking through the hat to form the unicorn's horn.

Retrieved from "https://assaultandroidcactus.miraheze.org/w/index.php?title=Peanut&oldid=1695"
Cookies help us deliver our services. By using our services, you agree to our use of cookies.