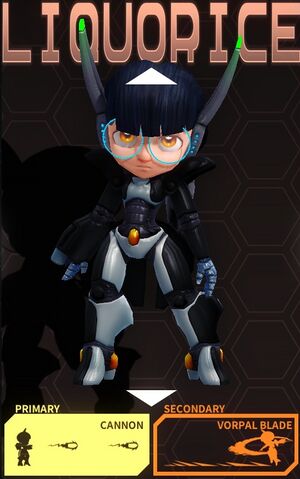 Liquorice is the ninth android in the roster. She is unlocked after defeating Medulla in Campaign mode. She is intended to be a secret character for newcomers to the game.

Her Cannon is powerful, but somewhat inaccurate and prone to overkill. Her Vorpal Blade allows for greatly increased mobility in the form of a dash, as well as a high-damage area-of-effect slash.

Liquorice was built on Luna and readily found work on Earth as a private military contractor due to her advanced specifications. However her inability to play well with others eroded her career prospects and she migrated to Jupiter shortly before disappearing, eventually being legally classified 'lost to space'.

Liquorice is a special forces style Android with built in weapon systems.

...you can think of her path as a 'what if' where she gets spooked and decides to end things early. 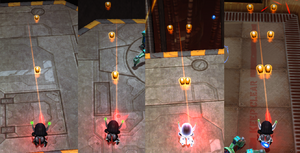 Cannon in its various reinforcement stages, from left to right.

A slow firing cannon that fires slow moving shots that deal 11 damage each. While the shot size gets larger at level 3, making it slightly easier to hit enemies, there is no increase in damage per shot, only rate of fire.

While boasting a higher damage output than most primary weapons, it is prone to overkill due to its high damage per shot. This means that there is some significant damage loss against enemies that do not have health that's an exact multiple of 11 HP, which is basically everything that isn't a boss, and it make fighting Wasps, Vector Factories, and Orbital Factories particularly cumbersome. But its overall high long ranged DPS makes it fantastic at killing other tough enemies. Firepower is very useful to Liquorice as a result since it patches over the overkill damage. 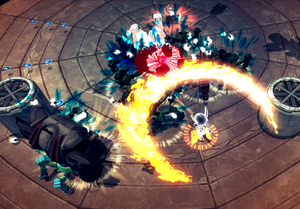 Fully-charged Vorpal Blade in Focus. Note the Bomber Titan to the left - the range is deceptively wide.

A somewhat tricky weapon to understand. Upon pressing fire, Liquorice will dash to the other side of the enemy that she is pointing at (If there are multiple enemies along the same line she will pick the furthest one, up to the maximum dash range). Once there, continuing to hold the fire button will charge up her blade, upon max charge or releasing the button, she will slash, which is essentially an explosion centered on Liquorice. Increasing the charge time increases the damage and size of the slash and consumes more heat. Contrary to popular opinion, she does not simply dash to where the mouse cursor is.

The slash radius needs only to touch the outermost part of an enemy to be able to damage it, this means that it is able to hit large targets like Titans and bosses further away than small targets like Wasps.

If after the attack is released there is still at least 1/3 of the secondary gauge left, you may immediately retarget another enemy and press fire to do another attack. This can be done up to three times with a full secondary gauge if you use the minimum charge up each time.

While dashing and while actually slashing, Liquorice is invulnerable, however she is vulnerable to damage while charging up her attack, making charging up a risky prospect, particularly against enemies that can turn and respond quickly at close range, such as Mega Kegs. A fully charged attack does more damage than three short strikes and has a much bigger radius, but uncharged strikes are completely invulnerable so it is up to the player to learn when best to charge the blade up and when to play it safe.

Unlike an explosion, Vorpal blade's damage values represent the total amount of damage across all enemies the attack can do. Therefore if you perform a slash in a thick crowd of tough enemies, you may find that you don't destroy all of them. Nodes from Factory are particularly bad at soaking up damage in this way. In this instance, damage is dealt to the closest enemies first.

Hitting Embryo with a fully-charged blade during a Shutdown is the easiest way to unlock the Scrambled Eggs achievement. 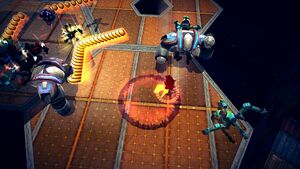 Like a spreadshot, only with a slower fire rate and much bigger bursts. An overall much less risky weapon than the Vorpal blade, but with far fewer uses for scoring and overall damage, Very efficient when dealing with wasps however, since each individual shot deals 5 damage rather than the usual 11, removing the overkill problem.

A hard hitting high risk android, Liquorice tends to excel highly in specific situations, such as using her Vorpal Blade to destroy multiple heavy enemies at the same time for massive Surge points. However, she is held back by her primary weapon being prone to losing damage due to overkill and failing to track fast moving targets. This tends to make her very capable against Large, tough enemies and bosses (Except Vespula) with both of her wepaons. Her Vorpal Blade's massive scoring potential makes her one of the higher scoring androids overall. 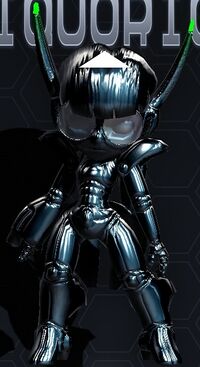 Liquorice's metallic skin can be unlocked by completing every level in Campaign using her. Any completion Rank will suffice.

This skin replaces most textures of her model with a dark silver/black metallic finish. The tips of her data horns retain their original green color.

Retrieved from "https://assaultandroidcactus.miraheze.org/w/index.php?title=Liquorice&oldid=1816"
Cookies help us deliver our services. By using our services, you agree to our use of cookies.