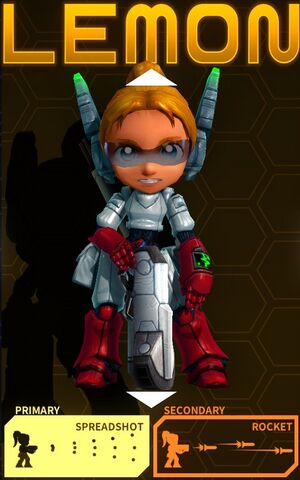 "If we stick together we can take on anything!"

Lemon is the third android in the roster, and one of the four that is unlocked by default (the others being Cactus, Holly, and Coral).

Sporting a bubbly personality and dreams of becoming a field medic, Lemon joins the fight to take back the Genki Star.

Lemon is all about dealing damage in a large area, with a primary that sprays bullets in every direction, and a high explosive rocket launcher.

Lemon was built on Phobos and works as a junior lab tech aboard the Genki Star in an attempt to put herself through Medic training and pay for her refit.

She has a cheery attitude, makes friends easily and feels like she owes a lot to Vespula who took her under her shears when she first joined the ship.

Lemon's first job was general assistance at a care facility on Mars that processed Earth climate refugees. She became enamoured with the role of the medical staff and vowed that one day she would also help people in the same way. She joined the Genki Star crew in the same intake as Holly and they bonded during orientation training.

Lemon's personality is cheerful, friendly, and perhaps a bit cocky.

It didn't suit you anyway! -Lemon, when taking the multiplayer Crown from another player

Spreadshot in its various reinforcement stages, from left to right.

The Spreadshot gun fires a spread of bullets in multiple distinct streams with the overal foward arc increasing with each level. The bullets also increase in size with reinforcement, but that only affects their hitbox size, not damage. Each bullet deals 1 damage each.

The high spread and projectile count makes it very capable against multiple, small targets (Particularly Wasps), and overkill is minimised. The total DPS is somewhat higher than Cactus' Assault Rifle, giving it a fantastic DPS overall. However, unless you are surrounded by mobs or firing at point blank range, there is going to be some wasted DPS due to the high spread. Therefore, usually the best way to play Lemon is to be up in the enemy's face to land as many bullets as possible.

Its usefulness increases in multiplayer or when using VPC, as the crowds of mobs are significantly thicker and absorb the majority of the spread, even when not at close range. 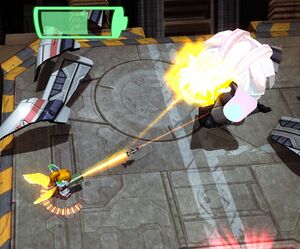 Firing a salvo of missiles at a Bomber Titan.

The Rocket Launcher fires four rockets which fly quickly and in a perfectly straight trajectory, and explode on contact for a sizeable AoE damage radius. These rockets can be fired in quick succession by holding the fire button, or fired individually by tapping. A contact shot is fairly powerful, enough to two-shot any Titan. It can also clear large amounts of enemies if you can surround the contact point with mobs, but you must be careful not to hit any stray isolated Wasps or other such things, as that will waste the shot. As you might expect from an Area of effect weapon, the number of enemies hit by one explosion doesn't change how much damage each one receives, so using rockets in densely packed groups of enemies is ideal.

Each rocket will accrue one bar of heat. If the heat bar is completely full after a rocket, an automatic weapon switch will occur shortly after, even if the fire button is not being held. Heat level affects the number of rockets that can be fired. Four rockets can be fired from an empty bar, down to two rockets from roughly 60% heat (ie. 2.5 out of 4 bars of heat). You will not be permitted to switch to the rocket launcher past 60% heat.

If there is less than a full bar of heat remaining when firing the rocket launcher, Lemon can still fire one more rocket, but the damage will be reduced.

A skilled Lemon player will leverage the rocket travel time to create Surges, by firing at distant targets first, then closer and closer targets with each successive rocket. 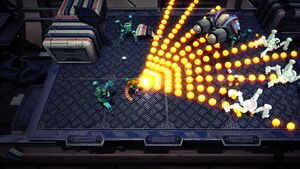 The mega spreadshot in action

Basically a 10-stream Spreadshot, as you might expect, but with the added attribute of shots being able to bounce off of walls. This makes the weapon much more effective in some zones than others. Tightly walled in levels such as Checkpoint suit the mega spreadshot better than open sided levels like Relay. More powerful than most secondary weapons at close range, but still doesn't match the raw power of the flamethrower.

Lemon is a jack-of-all-trades character, not excelling at any one stage or boss, but not being annoyingly bad for anything either. Players will find her damage output to be lacking for Infinity Drive compared to Starch or Cactus, and her middling Surge and speed potential makes her a relatively weak choice for scoring high on most Campaign levels.

Lemon shines a bit brighter in multiplayer when there are more mobs on-screen to catch stray Spreadshot bullets and maximise the splash damage from rockets, resulting in higher DPS utilisation at longer ranges. She is also quite easy to play - while she doesn't have a homing primary like Holly, you don't have to aim precisely, and you get multiple chances to land rockets on an important heavy target. 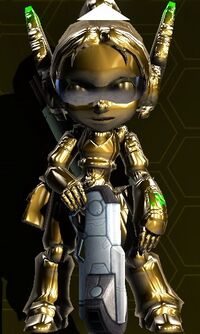 Lemon's metallic skin can be unlocked by completing every level in Campaign using her. Any completion Rank will suffice.

This skin replaces most textures of her model with a metallic yellow finish. The tips of her data horns, as well as the display on her wrist-mounted diagnostics monitor, retain their original green color.

Retrieved from "https://assaultandroidcactus.miraheze.org/w/index.php?title=Lemon&oldid=1817"
Cookies help us deliver our services. By using our services, you agree to our use of cookies.