Kegs are the bread-and-butter light enemy of a lot of levels. While fairly straightforward to defeat, they can add significant pressure in numbers. Kegs of all kinds can drop from above and also climb up from pits, once spawned, there is also a short delay where they can move and be attacked, but cannot themselves attack.

"Kegs are the ubiquitous and nimble footed general purpose workhorses of large spaceships, able to clamber over any surface and haul heavy loads. While not built for combat, when hostile they are capable of inflicting swift and devastating damage with their powerful front spikes."[1]

Easily identified by their green colouring and large frame, regular Kegs walk towards you rapidly, and hit you with their front claws in melee range, attacking using a one-two punch. The first deals one damage, the second deals two, meaning they can take you down quickly if ignored. They don't have particularly strong armour and they're surprisingly large for a basic enemy, meaning that it takes little effort to smash through hordes of these, useful given that they seldom turn up in small numbers.

Uniquely, Regular Kegs appear in every single level in the game outside of bosses.

"Hastily refitted on board when the robot uprising began, weaponized Hunter Kegs use energy rifles to make them an effective ranged thread. They are slightly better armoured than standard Kegs."[1]

A much more slow moving enemy than the normal keg Rather than using a melee attack, Hunter Kegs fire a straight three-round burst of bullets in your direction intermittently. At close range they will turn and fire rapidly.

They can be identified by their white coloring. Unlike hordes of Kegs who generally can be beaten back with relative ease, hordes of hunter kegs can represent a big problem since all of their bullets will pass through other enemies on their way, and their large numbers, couple with their slow bullet speed, will quickly make a very deadly wall of bullets coming your way.

First encountered in the Tutorial, and then in Turbine. 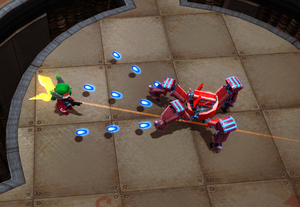 Mega Keg in Turbine, the first one to appear outside the tutorial.

"Overhauled for siege breaking and direct combat, the physically imposing Mega Keg can take significant punishment while laying down covering fire. They often lead and support groups of Hunter Kegs."[1]

By far the most dangerous variant, Mega Kegs are larger in size, have much more health, and fire a three-bullet spread three times in your direction for a total of 9 projectiles. At range these enemies tend to be fairly unthreatening and low priority, but at close range that can be a nightmare.

They can be identified by their increased size and red coloring.

To down one without dropping Combo usually requires a secondary weapon or reinforced primary weapon. They do not have a melee attack, but at close range the will rapidly turn and fire their weapon with very little delay between bursts. Combined with their high armour, this close range attack is often the most deadly aspect of mega kegs; while Titans have much more devastating attacks that cover larger areas, they have much larger tells and slower windups while mega kegs can respond and attack nearly instantly at close range.

If a Mega Keg is forcibly moved while firing a burst (eg. by moving floors), the source and direction of the burst will remain the same as when it started firing, making it look like the bullets are coming from thin air. This is an intentional design decision to stop bullet patterns from becoming too hard to deal with.

First encountered in the Tutorial, and then in Turbine.

Retrieved from "https://assaultandroidcactus.miraheze.org/w/index.php?title=Keg&oldid=1624"
Cookies help us deliver our services. By using our services, you agree to our use of cookies.