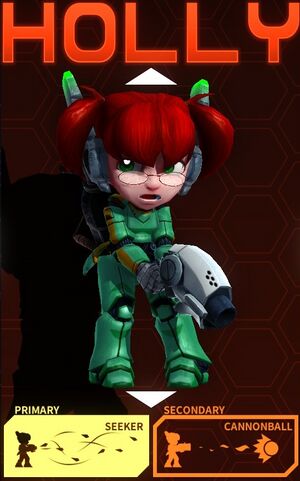 "It's never too early to panic."

Holly is the second android in the roster, and one of the four that is unlocked by default (the others being Cactus, Lemon, and Coral).

A shy bureaucrat, Holly reluctantly overcomes her fears in the fight to take back the Genki Star.

Her primary weapon, while not particularly powerful, is unique in that the projectiles seek enemies, resulting in high damage utilization. Her Cannonballs can steamroll through multiple tough enemies in a row.

Holly was built on Phobos and dreams of a peaceful career behind a desk. She joined the Genki Star as an entry level inventory manager with the intention of working her way up, and only has an Assault Android frame for workplace liability insurance purposes.

She is stressed often and easily, typically by her boss, Embryo.

Holly is an avid reader and her hobby is tracking down obscure and de-listed ebooks.

Holly used to visit Shiitake all the time and has learnt to handle her oddness, Shiitake considers Holly her best friend.

Seeker in its various reinforcement stages, from left to right.

The Seeker gun fires fast, homing bullets at a high rate and with high spread. The bullets have extremely strong tracking (will even hit enemies behind you if necessary) and will tend to favor closer enemies in front of holly. The bullets will try to retarget a different enemy if the first is destroyed, but they expire fairly quickly and may not make the distance unless the next enemy is nearby. Each bullet tracks its own target independently, meaning that in some cases you will find your shots splitting up between multiple targets due to the spread. Uniquely, the shots can also track in all three dimensions, allowing you to attack wasps and mines as they spawn. Most other enemies cannot be damaged until they have fully spawned however.

DPS and range are much lower than Cactus's Assault Rifle, but DPS is almost always fully utilised due to the homing and low overkill. This weapon shines brightest against sparse enemies at medium range such as Kegs and Wasps. Holding Combo against light enemies is nearly effortless with this weapon. However, even at max level, the seeker is simply incapable of destroying heavy enemies without dropping chain without the assistance of Firepower or something to pad the chain out.

Firepower is particularly interesting with the Seeker as it not only doubles her total DPS, but allows you to focus purely on aiming the firepower bots, (which are usually quite awkward to aim) while letting the Seeker take care of itself.

Unfortunately, the homing property can be a disadvantage as well, as they can track targets that you might not want to hit. For example, Vespula's wasps in her final phase can sap your DPS. Similarly the high spread can mean you end up attacking multiple enemies at once, spreading the Seeker's already low damage across too many targets to hold the chain. Similarly, the DPS is so low that the seeker alone cannot destroy heavy enemies alone without dropping the chain, you need to use Firepower, Shutdown or pad the chain with a weaker enemy to destroy such enemies. A Cannonball easily punching through a Bomber Titan, and well on its way to another.

The Cannonball launcher addresses Holly's inability to deal with large targets using the Seeker gun. The Cannonball is a slow-moving, fairly wide projectile that destroys and punches straight through enemies until it has dealt a certain amount of damage, at which point it stops dead. After flying for a few seconds, It will also naturally lose damage until it drops to the ground after a certain distance, even if it doesn't hit anything.

Firing the Cannonball will always bring the weapon to maximum heat level, and will prompt an automatic weapon switch shortly after, even if the fire button is not being held. The player can (and should) manually switch immediately after firing the cannonball, which is slightly faster than waiting for the automatic switch. The single-shot nature of the weapon means you will be able to switch back and start cooling the weapon down more rapidly than weapons that take time to fire, meaning you can switch to the cannonball much more frequently than other secondary weapons. Make sure you take good advantage of this to make up for its otherwise low damage.

A fully cooled-down cannonball can deal 340 damage. Heat level affects the damage that the cannonball will deal before it stops. Cooldown doesn't affect speed of the cannonball, nor does it affect the unimpeded distance it will travel. The highest heat level that can still be fired (ie. weakest possible cannonball) is roughly 60% (ie. 2.5 out of 4 bars of heat).

If the cannonball hasn't got enough strength left to destroy a normal enemy, but has enough to leave it on very low hp, it will destroy it anyway and then immediately drop to the ground.

Due to the slow speed and long lifespan of the cannonball, it is possible to fire it at a distant enemy and switch back to the seeker to destroy other enemies at the same time to cause a Surge. 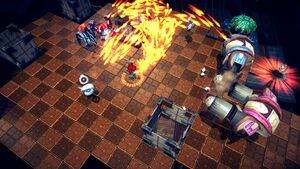 The mega seeker in action

Replaces the Cannonball when "Mega Weapons" EX option is enabled (disabling leaderboards). The Mega Seeker launches a very dense cloud of seeker bullets upwards that then curve around and target nearby enemies like the normal seeker. Given all shots are aimed upwards, no directional aiming is required to use, but the shots cannot travel far before fading out so it is best used near enemies to maximize the time they have to target (and retarget) enemies.

Due to the finite life of the bullets and steep angle they decend on enemies with, the mega seeker has trouble dealing with fast, small enemies such as wasps and mines due to shots missing and hitting the floor, and the bullets wasting much of their lifespan trying to retarget enemies if there are a lot of them around. However it is excellent at dealing with larger and slower enemies as its damage is very efficiently utilised without needing your enemies to be lined up.

Holly's primary advantage is that she is extremely easy to play and get a high Rank, perhaps the easiest out of any android. Her bullets literally aim themselves, so all you really need to worry about is dodging enemy bullets and pulling out the occasional Cannonball for heavy targets. She's a favourite for achieving S+ Rank for most levels. She can make short work of Liquorice in Collider by simply shooting her around a pillar.

Where Holly falters is when you are trying for a truly good score in just about any level or mode. Her weapons, while easy to use, are relatively weak, and it shows the most during bosses and early on during levels. The Cannonball has extremely limited Surge potential, is all-or-nothing and hence suffers from overkill at times, and is so slow that enemies can sometimes simply move out of the way. Holly is rarely seen on the higher places on the score leaderboards. However she is reliable and surprisingly fast, making her one of the better characters to pick for Infinity Drive 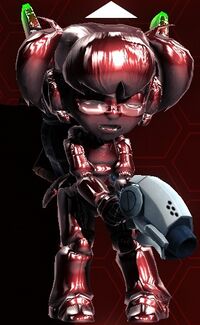 Holly's metallic skin can be unlocked by completing every level in Campaign using her. Any completion Rank will suffice.

This skin replaces most textures of her model with a metallic red finish. The tips of her data horns retain their original green color.

Retrieved from "https://assaultandroidcactus.miraheze.org/w/index.php?title=Holly&oldid=1823"
Cookies help us deliver our services. By using our services, you agree to our use of cookies.