Light enemies that can fly over pits, Drones are common occurrences and are rarely a significant threat. They usually serve as distractions or as Combo padding. 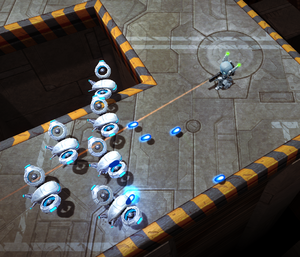 Drones being annoying in Filament.

"General purpose flyers, Drones are able to carry many times their own weight. This stability affords then accurate aiming and firing with their underslung energy rifle."[1]

Slow, weak and with low health, Drones will naively chase you at a distance, but back away if you get close. They will continuously and slowly fire straight bullets at you, once every few seconds. While they're unlikely to cause significant damage on their own, they do have a habit of hitting you with one hit when you're already low on health, resetting the regeneration timer or finishing you off. 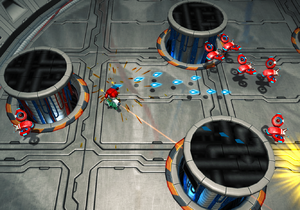 Turbo Drones being annoying in Collider.

The much more annoying version of Drones, Turbo Drones move quicker than regular Drones and will try to strafe away from your laser sight and tend to stay at a greater distance. This can be especially annoying to deal with if you let them circle around pillars and walls.

They fire 3-round bursts of accelerating bullets. While firing, drones remain perfectly still and fire all three bullets in the same direction. This can lead to surprising downs from fully health if multiple turbo drones fire at the same time.

Retrieved from "https://assaultandroidcactus.miraheze.org/w/index.php?title=Drone&oldid=1819"
Cookies help us deliver our services. By using our services, you agree to our use of cookies.