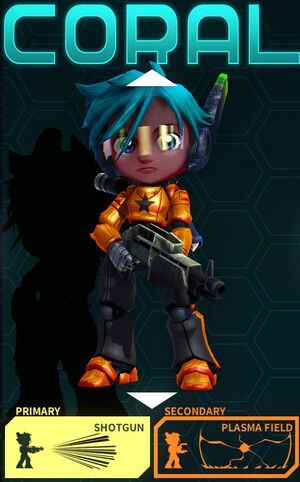 Coral is the fourth android in the roster, and one of the four that is unlocked by default (the others being Cactus, Holly, and Lemon).

A passionate martial artist with a fiery personality, Coral joins the fight to take back the Genki Star.

Coral is a high-damage, low-range android, sporting a shotgun that can take out many enemies at once, and an energy field that can simultaneously deal damage, reflect projectiles, and push away mobs.

Coral was built on Phobos but travelled to the Jupiter region to study martial arts and freelance for heavy industry.

On hearing of the possibility of a legitimate android fighting league starting up on Earth, Coral took a job as a fitness trainer aboard the Genki Star to get back to the inner planets.

Coral believes in the potential of androids as athletes, and a world where android mixed martial arts would be regarded as a legitimate competition, not a sensationalised bloodsport substitute as such events have been treated in the past.

Coral is saving for a high performance custom hard shell.

Shotgun in its various reinforcement stages, from left to right.

The Shotgun is a powerful short-ranged weapon, firing a wide fan of short-ranged rays that terminate after a few metres. While rate of fire is low, damage per shot and resulting DPS is extremely high. The burst nature of the weapon also makes it ideal for getting Surges, destroying at least two enemies in the same shot is relatively easy with the high damage and wide area it covers. Simply trying to use the shotgun to destroy enemies as fast as possible will naturally mean you get surges.

With reinforcement, the number of rays per shot increases, and the spread widens. Rate of fire is always one shot per second. 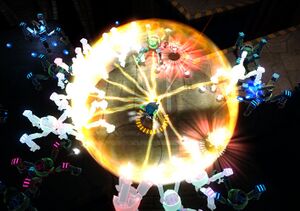 Plasma Field pushing away and damaging a horde of mobs.

When used, Coral will drop a wide sphere of plasma on her current position. The sphere damages any enemy touching or inside it, as well as serving to push away mobs and projectiles. The rate of repulsion is stronger when nearer the centre of the shield, and there is a zone on the edge of the shield where it will damage enemies, but not push them. Bosses and Turrets cannot be pushed, but are still damaged as normal. The radius of the bubble also extends vertically, allowing it to damage wasps and mines as they're still entering the playable area

The Shield deals 10 damage per tick, divided amongst the ten closest enemies to the centre (Rounding all fractional damage down). Therefore a single target will be damaged much more rapidly if it is the only enemy in contact with the sphere. Proximity to the centre of the sphere does not change the damage dealt unless there are more than 10 enemies, as long as the enemy is in range of the outer edge. The push force exerted on enemies is completely independent of the damage dealt and affects all enemies in the radius. Therefore if the sphere is placed in the centre of a large group of enemies, it is possible for even weak enemies like wasps to be pushed out of the sphere's radius before being destroyed.

Placing the Shield will always bring the weapon to maximum heat level, and will prompt an automatic weapon switch shortly after, even if the fire button is not being held. The player can (and should) manually switch immediately after placing the shield, which is slightly faster than waiting for the automatic switch.

Heat level affects the time for which the shield is active. A fully-cooled down Shield lasts for around 4 seconds. The highest heat level that can still be fired (ie. briefest possible Shield) is roughly 60% (ie. 2.5 out of 4 bars of heat), and produces a shield roughly 2 seconds in duration.

It does not protect against aerial rockets (Fidos, Embryo etc), or lasers (Reaper Spectres, Turrets). Bullets that are traveling at high velocity can penetrate the shield to quite a great distance, especially if the shield encapsulates the source of the bullets which can potentially launch the bullets from the field at a much higher velocity than normal. In Collider, Liquorice's bullets are only weakly affected, they can be deflected but a square hit will pass right through. The shield can also cause bullet patterns to fold on themselves and become even more dangerous, especially to your multiplayer partners. 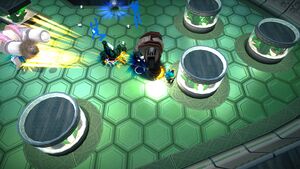 The impressive range of the mega shotgun

A two-shot, high damage and long ranged weapon, the mega shotgun is a very satisfying weapon to use and can be used to carve down a column of enemies with ease. Also worth noting that switching to the mega shotgun and switching back is not significantly different to just firing the shotgun twice, therefore it is recommended to use the mega shotgun liberally, even not while fully charged (Which reduces the damage) since there's often not many opportunities to get the full damage of the mega shotgun on a group of enemies.

"What might appear to be at odds with that is they're both short range weapons, but the utility of the plasma field lets Coral stay closer to enemies, or advance into dangerous areas where other Androids would be expected to backpedal and strafe. Despite it lacking the raw power other secondary weapons, the way the plasma field can be deployed and then stacked with the shotgun allows it to have a damage boost role befitting a secondary weapon."[4]

Though she is a challenging character to play, Coral is a very strong Android for high scores, thanks to her high damage output and Surge potential. Heavy enemies are often effortless to take down in a single point-blank shot, and a fully reinforced shotgun blast can cut down swathes of weak enemies. On most levels outside of bosses, however, she is outshone score-wise by Shiitake.

Thanks to her excellent DPS primary which can work in conjunction with Plasma Shield, Coral is an excellent boss buster and excels at Embryo, Vespula, Justice and Medulla. She tends to struggle with Venom due to her short range, however, and Dark Embryo's 5th phase is incredibly difficult for her to deal with.

Coral's main weakness is that she is difficult to play, while her shotgun damage is theoretically very high, it is often very underutilized due to its spread and overkill. Shots and shield placement must be deliberate, the shield's ability to deflect bullets can often make things even more difficult, and her lack of range requires careful management of enemy positions and topping up Accelerate where possible.

Coral's metallic skin can be unlocked by completing every level in Campaign using her. Any completion Rank will suffice.

This skin replaces most textures of her model with a metallic cyan finish. The tips of her data horns retain their original green color. 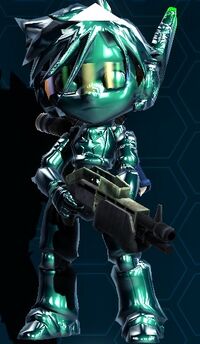 Retrieved from "https://assaultandroidcactus.miraheze.org/w/index.php?title=Coral&oldid=1821"
Cookies help us deliver our services. By using our services, you agree to our use of cookies.