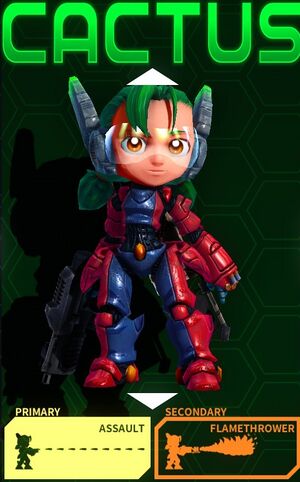 "Don't worry, I do this kind of thing all the time."

The eponymous Cactus is the first android in the roster, and one of the four that is unlocked by default (the others being Holly, Lemon, and Coral).

She is the main character of the game, kicking off the events of the campaign by responding to a distress signal by the Genki Star as part of her duty as a Junior Constable under the Interplanetary Police (IPP).

She is a fairly well-rounded character, sporting an average long-ranged assault rifle, and a devastating but short-ranged flamethrower.

Cactus was built at the Luna facility before voluntarily seeking employment with the Interplanetary Police.

Despite her many successes, her career was jeopardised by repeated disciplinary action until she was internally recruited by the Robot Malfunction Response Team who valued her skills over her inability to avoid causing property damage.

...her assault rifle is standard issue, her flame-thrower was improvised out of an old BBQ after she was told she could under no circumstances have a flame-thrower. 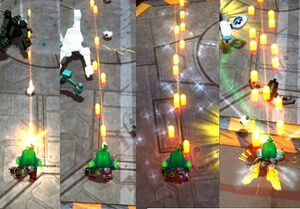 Assault Rifle in its various reinforcement stages, from left to right.

The Assault Rifle is a basic weapon with a linear bullet pattern, zero spread, no damage falloff, long range, and above average DPS. Higher upgrade levels increase the width of the bullet stream as well as the number of bullets. It also features a very noticable damage boost at between levels 2 and 3, so it's important to collect weapon energy rapidly.

Due to its long effective range, it can quickly catch faraway enemies when needed, or effectively pick off dangerous enemies like Mine Tanks or Buster Titans. However due to its narrow bullet stream, careful aim is needed to maximise its efficiency, every target needs to be aimed at one at a time.

Given the assault rifle performs almost identically to the weapons the Firepower Drones have, the two weapons compliment each other well and don't suffer from the problems other weapons have when trying to optimize their usage. 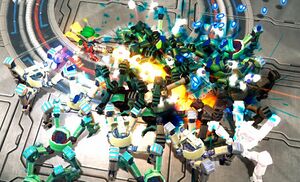 In stark contrast with the Assault Rifle, the Flamethrower has short range, but enormous DPS over a sizeable duration, allowing her to take out multiple heavy enemies or large swathes of light enemies with a single use. It fires a stream of particles each with a variable lifespan over a short distance, meaning that the flamer at close range will deal more damage than at the tip of the stream. The flames do not penetrate targets, even though it's very rapid kill speed can give the impression that it does. When firing the flamethrower, there is a minimum duration it will fire for, making it tricky to use efficiently on sparse groups of enemies.

Due to its continuous damage output, it's useful in basically any situation where Cactus can get up close and personal with the enemy. An extremely potent boss-killer when combined with a Shutdown. To make good use of it against lighter enemies, try to fire it in short bursts to prevent excess damage being lost firing flames at nothing, and don't be afraid to switch back to the assault rifle early if the group of enemies becomes too sparse. 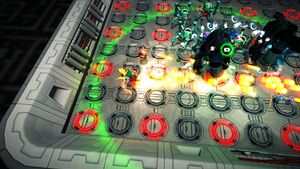 Replaces the flamethrower only when "Mega Weapons" EX option is enabled (disabling leaderboards). The mega assault rifle is basically the normal assault rifle with about 50% more damage overall. The only special property beyond this is it's unusually long duration for a secondary weapon, allowing you to use it very frequently throughout a stage.

The flamethrower is typically a better choice however, especially against bosses.

Cactus is a fairly well-balanced character and is well-suited to most tasks. For survival purposes her assault rifle is almost peerless, letting you deal excellent damage from safe ranges. However in many cases her flamethrower can hold her back, while boasting obscene damage potential, it's very difficult to utilise well and it is unwise to try to use it every time it has cooled down.

Her flexible, high-damage loadout gives her exceptional survivability, which makes her one of the best choices for Infinity Drive and speedrunning, although perhaps not quite as good as Starch.

While she is not the absolute best at any one boss, she is quite capable at all of them, making her a top pick for Boss Rush mode.

One place where she appears to fall behind significantly is Collider. Due to her exclusively linear damage output, she can't leverage the pillars against Liquorice as effectively as most other androids can. Firepower drones can be used to fire from behind cover with good positioning.

The other place she falls behind is with scoring due to both weapons being weak choices for getting Surges, meaning Cactus often doesn't find herself on high score boards.

Cactus' metallic skin can be unlocked by completing every level in Campaign using her. Any completion Rank will suffice.

This skin replaces most textures of her model with a metallic green finish. The tips of her data horns retain their original green color. 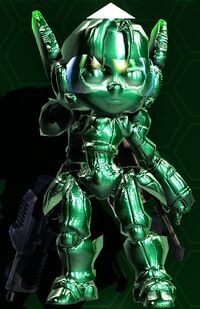 Retrieved from "https://assaultandroidcactus.miraheze.org/w/index.php?title=Cactus&oldid=1684"
Cookies help us deliver our services. By using our services, you agree to our use of cookies.