The only failure condition in Assault Android Cactus is running out of Battery, which is a continuously draining bar displayed in the centre of the top edge of the screen (essentially a timer). The battery bar depletes from full to empty in 60 seconds.

When there is less than 10 seconds of Battery remaining, the screen will begin to throb red and the music will fade out, replaced with a pulsing sound effect.

To increase the bar, players must collect battery pickups, which spawn from Enemies. A battery pickup extends the battery bar by 25 seconds. It is also worth 1000 base Score points (10,000 points at maximum multiplier, Surge bonuses do not affect battery scoring).

After a few seconds, the Battery will begin to blink red and eventually vanish. Missed batteries are essentially thrown away and the player must work to generate another.

Due to the importance of batteries, they are able to block stage transformations that would otherwise destroy them or isolate them from the player.

In regular levels, the battery spawn is based on enemies that have been destroyed since the last battery. An enemy's contribution towards the next spawn is proportional to the number of Volts they drop when killed. An enemy's death always contributes even if it is killed by red damage or kills itself (eg. a mine rolling off the edge)

Different levels have different Battery spawn requirements. Harder levels require more volts, but this is balanced by the much larger numbers of enemies that inhabit them. In Infinity Drive, the battery spawn requirement increases for each layer you progress to, eventually requiring you to be extremely aggressive to keep on top of the battery drain.

Once a battery is due, the next valid enemy to die (for any reason) will spawn the battery. Valid enemies are enemies that are currently standing on or floating over areas of the level that players can reach (For example, a drone floating over a pit will never drop a battery, nor will a turret sat on an island the player cannot walk to). Enemies that are worth no score (Such as mines dropped by Bomber Titans) will never produce a battery.

Once a battery is due to spawn, progress towards spawning the next battery can be made, but at half the rate. Hence it is important to pick it up as soon as possible. Under no circumstances can two batteries be present at once.

A Battery will never spawn if it would overflow the battery meter. This enforces an effective minimum time of 25 seconds between batteries at a high level of play. You can accumulate battery credit while waiting for the next Battery to spawn.

A Battery is also spawned whenever a boss phase is defeated (except the last). If a battery is still present from the previous phase, the old battery is immediately destroyed when the new one spawns. Batteries dropped during Justice gain 45 seconds as opposed to the usual 25.

Collecting a battery while critically low on power awards an increased amount of charge gained, up to 35 seconds.

In addition, the distance the battery will jump towards the player increases dramatically as the battery indicator empties. 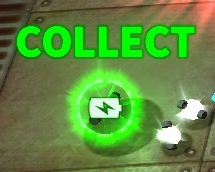 The first 5 batteries encountered on a blank save file will have a big green "COLLECT" above it, to make it clear to new players that you have to collect it.

If you fail to collect a battery before it expires, the "COLLECT" will appear again on the next battery as a reminder (even if that battery occurs in a different level)

If you're on critical battery (Within 3 seconds of being empty) and have made most of the progress towards the next battery spawn, the game will spawn one from the next enemy destroyed anyway, known as a "loaner" battery. They appear and act the same as normal batteries, however you will now have negative progress towards the next one - the remaining progress towards spawning a battery you skipped by getting a loaner battery is added onto the requirement for the next one. Unless you're able to pick up the pace, you'll find yourself relying on loaner batteries until eventually you'll fall too far behind for a loaner battery to spawn, causing a level failure.

The mechanic is not a free ride, you always pay the same amount for each battery, but it can give you enough time to get back up to speed and get back to positive battery progress. It is likely this mechanic was introduced to prevent a singular knockdown at a bad time to end your attempt at the level.

Medulla's final phase forces the player's battery life back up to 60 seconds, but no battery is visibly dropped to indicate this.

The indicator also turns yellow. It's not known what this means.

Retrieved from "https://assaultandroidcactus.miraheze.org/w/index.php?title=Battery&oldid=1656"
Cookies help us deliver our services. By using our services, you agree to our use of cookies.