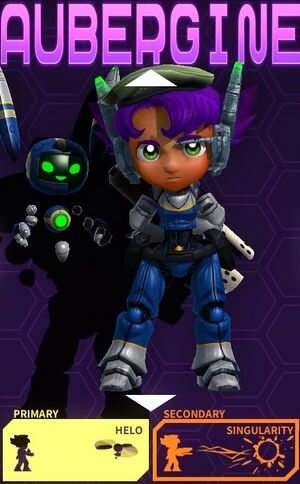 Aubergine is the sixth android in the roster. She is unlocked after defeating Vespula in Campaign mode.

Aubergine is unique in that she uses a propeller-like robot named Helo in order to do damage to foes. Hence, an Aubergine player must control both Aubergine and Helo at once. Her Singularity launcher can simultaneously concentrate and damage enemies.

Aubergine was built on Phobos to serve on the bridge of the Genki Star, but her strict personality made her unpopular with crew and she was reassigned to lower deck security. She works closely with her personal utility robot, Helo, and her direct superior and mentor, Justice.

Aubergine has had Helo since she joined security - their pair bond is why he stuck with her when the other robots turned. The Singularity Generator is an experimental weapon that she appropriated after the situation started.

Helo is smart but the reason he could choose at all is because of his bond with Aubergine - robots (machines without cores) follow a hierarchy, with most reporting to a Section Lord which in turn reports to the Nexus Core. Helo reports directly to Aubergine, breaking that link. Robot intelligence is difficult to quantify, but you could probably compare Helo to a particularly intelligent dog.

The other androids try not to hang out with Aubergine because she's bossy. Aubergine assumes they see her as an authority and avoid fraternising out of respect. She quickly developed a one sided rivalry with Cactus over who is in charge.

Based on rough empirical testing[1] In addition to the increased damage, higher weapon ranks also cause Helo's attack to cover a larger area.

A complex weapon that behaves differently for each control system. For mouse users, Helo will travel towards where the mouse pointer is, spinning and inflicting damage in a disk shape as he moves, up to a maximum range from Aubergine.

For pad users, holding down the trigger will make Helo head outwards along the direction Aubergine is facing up to his maximum range, letting go of the fire button will cause him to return. Attacking enemies near to Aubergine typically requires tapping the fire button to keep him at the right distance, or rapidly spinning in circles with the trigger held. Contrary to popular belief, analogue trigger sensitivity is not used to determine how far Helo moves.

Helo is unique in that even when the fire button is released or the player switches weapon, Helo will continue to attack as he floats back towards Aubergine, stopping only once he touches Aubergine or gets stuck on a wall. In the latter case, Helo will instantly teleport back to Aubergine.

When attacking, Helo spins around and damages targets he floats near to. If multiple targets are close enough to be damaged, only the one closest to Helo takes damage:

"Helo only hits one enemy at a time (the closest) but can switch enemies instantly. Technically he does one damage per tick, and the tick rate [increases] as Aubergine's weapon rank rises."[2] 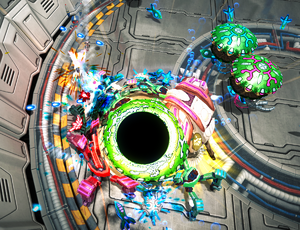 Singularity sucking up some mobs in Centrifuge.

Another highly unique weapon. The Singularity fires out in a single shot, consuming all available secondary power. The shot flies instantly and will collide with enemies, the level, or its maximum range and form a black hole at that point. The enemy directly struck with the singularity takes an upfront amount of damage and the resulting black hole continues to damage the enemy closest to its centre.

Whilst the singularity is active, all enemies within a wide area have their normal movement disabled, and a force pulling them towards the singularity is applied instead dragging in normal enemies from a wide distance. Enemies have different resistances to being pulled in this way, typically airborne enemies will be pulled much more readily than grounded ones.

This synergises well with Helo since concentrating the mobs means Helo has to travel less distance between them to damage them. It also synergises extremely well in multiplayer (especially with AoE attacks like Rockets, Propeller Mines and Vorpal Blade).

Try to hit the heaviest mob on screen due to the impact damage, which can be wasted if used on a low-HP enemy.

While the black hole lacks the ability to suck in bosses and Turrets from afar, direct hits will immobilise the boss for the duration, inflicting the maximum damage. It's therefore imperative that direct hits are used against bosses to maximise damage. This affects some bosses differently, most bosses can still rotate while caught in the singularity, but Medulla's shell phases will also be prevented from rotating. 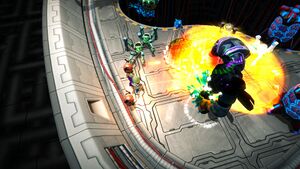 Based on rough empirical testing[4]

Replaces the Singularity only when "Mega Weapons" EX option is enabled (disabling leaderboards). Unusually for a mega weapon, Mega Helo does more damage than the weapon it replaces. Helo briefly attacks with a much wider and damaging version than normal, as you might expect. Secondary energy is consumed whenever Helo is attacking, even if the attack button is not pressed, however if Helo is still far from Aubergine when the energy runs out, he will continue to attack even when the secondary energy has expired (He will revert to normal once the weapon switch has completed).

Aubergine generally suffers from being a low damage character, but makes up for it with highly efficient weapons, in particular the ability to continue to damage with Helo while swapping weapons and unique crowd-controlling abilities with the Singularity.

Helo's unique ability to travel freely allows Aubergine to attack from behind cover with relative impunity, which is particularly useful in Collider. Typically her strategy will involve using the Singularity to pull in enemies into one place and destroying them with Helo, allowing him to instantly swap targets once destroying one instead of wasting damage between targets the way most characters do. Good use of the Singularity is a requirement to keeping the chain since Helo is slow to respond to targets that are a large distance away from each other. As an added bonus this strategy translates well into multiplayer where other players can take advantage of the tightly grouped enemies with their own weapons.

Arguably the weakest character to take against bosses due to the low damage.

Aubergine's metallic skin can be unlocked by completing every level in Campaign using her. Any completion Rank will suffice.

This skin replaces most textures of her model (and Helo's) with a metallic purple finish. The tips of her data horns, as well as Helo's face and body lights, retain their original green color. 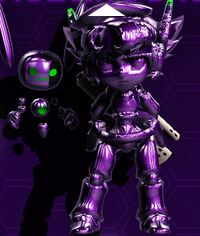 Aubergine was originally designed to have an entirely different weapon set involving a burst-firing carbine and cluster grenade launcher, but this was eventually dropped due to the carbine being to similar to the laser and the cluster bombs being too unpredictable.[5]

Retrieved from "https://assaultandroidcactus.miraheze.org/w/index.php?title=Aubergine&oldid=1726"
Cookies help us deliver our services. By using our services, you agree to our use of cookies.